In regression models, we frequently face the situation where we need to look at outliers and influential observations. We know that a common practice is to perform diagnostics checks to dig deeper and see how different points affect the fitted model or its coeffecients.

In this post, we will focus on two concepts (leverage and influence), but we will not dig deep into the math behind them. We will try to visualize and catch the intuition behind them first. We will also use a simple Shiny App to demonstrate the concept. And if you get the idea with a simple linear regression model, it will be easy to extend it to more complex ones.

Leverage is a measure of how far an observation on the predictor variable (Let it be X) from the mean of the predictor variable. To understand it, let’s imagine a beam pivoted at a fixed hinge. The higher the leverage value of an observation, the more potential it has to impact the fitted model. This depends on how it conforms to the fitted model.

We can read this everywhere, but to get the concept easily, let’s look at the following example.

First , we will simulate 100 points and plot the regression line as follows: 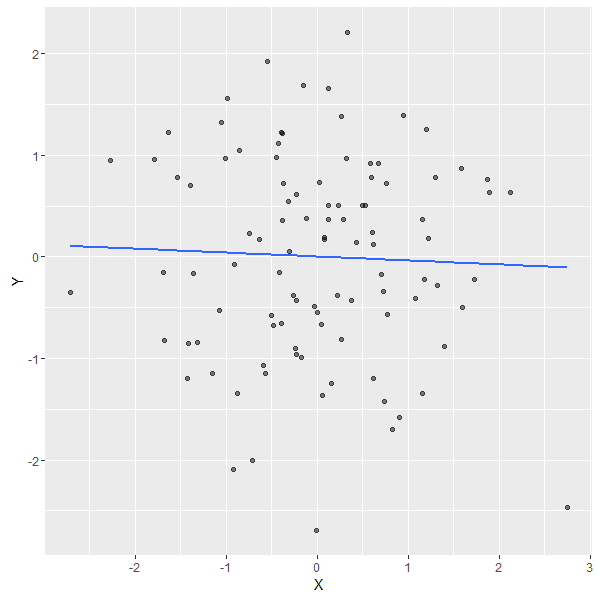 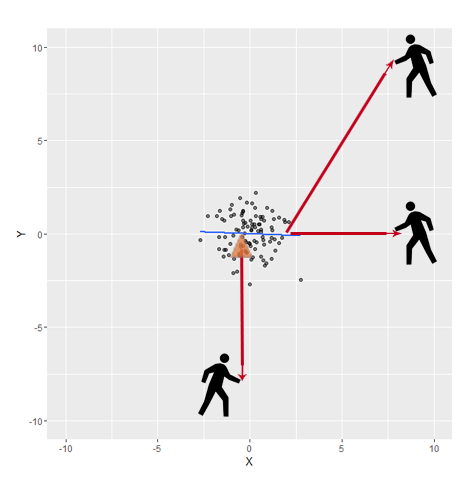 If you think of the regression line as a rod pivoted at the orange triangle, which is placed at the mean (here [0,0] since X,Y are centered), you will be able to conclude the answers easily. For example:

What if the guy moves to another location?. Now, it should be easy for you to expect whether he will be influential or not, following the same way of thinking. If you still need more examples, you can try the following Shiny app to adjust different values and check the outcome.

This simple Shiny App demonstrates the concepts of leverage and influence, displays the linear model coefficients and some of the influence measures for a point with adjustable coordinates. This point is prepended to the 100 points generated earlier. Then you can see how the regression line is affected and how the displayed values change.

Now we got the intuitive explanation of the leverage and influence, but for multivariable regression or more complex models it is not easy to compare the model to mechanical system. That is why we use influence measures that can be calculated in R easily. The following are the measures we are interested in here. However, there are more values that are used in diagnostic analysis.

These values, and the rest of the influence measures, can be plotted versus the indecies of the observations to spot any extreme values and see the variations.

Now you can play more with the Shiny App to make sure your understanding of the displayed values goes with the intuition behind them.

(If you face any difficulty viewing the Shiny App, you can find it in a Github repo here)